Perfectly crispy on the outside, the paper thin crust on my La Bagel Delight bagel wraps the incredibly chewy dense inside. I'm not one of those abominations that orders their bagels “scooped out.” No, I want every milligram of the exquisite doughy core of my bagel and La Bagel Delight delivers my carb fix, that shot of yeast-powered dopamine bliss, like no other bagel I've ever had the privilege of ingesting. I was feeling adventurous today and got lox spread. Normally I play the bagel game pretty simply and get a toasted everything bagel with plain cream cheese. If I'm going to be driving while I eat, I'll forgo the crumbs of the everything bagel and get cinnamon raisin instead. If it's early in the morning, before about 07:30, and the bagels are still warm from the oven, I'll skip the toasting. Regardless, simple is the principal. I remember one autumn morning last year I was in line behind a bloke, a jogger it looked like, who ordered a toasted plain bagel scooped out with egg whites and turkey. He stepped aside to wait for his breakfast, if you can really call it that, I'm undecided as to whether egg whites count as actual food or not, and I stepped up to order. Proudly, making sure he could hear me, I ordered an everything bagel with yellow eggs and pork sausage. Bagels aren't meant to be healthy—they're meant to be delicious—and somehow it felt as if I needed to make up for his error in judgement by getting the most unhealthy thing I could. It restored a little bit of balance to this messed up world.

Today, though, I ordered lox spread. It's an 80 degree day without a cloud in the sky, so I walked to the pier and sat down on a bench in front of Jane's Carousel. The bagel was salty and yeasty and packed to the brim with umami. On my right a young couple drank iced coffee. They spoke in hushed tones and exchanged disappointed looks with each other. They weren't quite breaking up, but they were clearly fighting about something in the sort of pseudo-calm, nothing to see here way that a couple fights when they're in public. On my left there were three girls in their early teens dressed as ballerinas. Their teacher, or maybe one of their mothers, held an SLR and took photos of the girls while they posed with the east river and the two bridges in the background.

Those bridges, the Brooklyn bridge to the south and the Manhattan bridge to the north define my neighborhood. Tourists come here for two reasons, to eat at Grimaldi's pizza and to see the Brooklyn bridge. They walk across it and excitedly take selfies with the towers in the background. The art-hopefuls take black and white shots of the cables ascending into the sky, not realizing that ten-thousand other people have already taken the same photo that same week. Even my friends from the outer-boroughs, despite the fact that they were born in New York and have lived here 20 years longer than I have, want to walk across the bridge. Something about it is magical. Maybe it's the fact that it's so old, that it's a miracle of engineering that it was ever built in the first place, or that so many people died during its construction. Whatever it is, people come here by the tens of thousands every day to see it.

Living here is different. I don't take photos of the bridge. I don’t walk across it. I'm more likely to walk across the Manhattan bridge because I want cheap dumplings in Chinatown and don't want to spend $5 on the train. The Brooklyn bridge empties into the financial district and I have no reason to go to the financial district. But that's not to say I don't have a connection to it. I don't take photos of the bridge anymore, not since my first month of living here. But almost every photo I take, no matter what the actual subject is, the bridge is there. It hangs majestically in the background like a sleeping giant. Every time I look out the window of my office, the bridge is there. Every time I walk through the park to clear my head, the bridge is there. To me it's not a landmark, it's a symbol. It means I'm home, that I'm safe. While friends come and go, projects at work start and finish, the soles of my shoes go from new to worn in to worn out, the bridge is there.

Eventually the feuding couple leave and the ballerinas finish taking photos. I finish my bagel and get my daily fill of watching boats go up and down the river, letting the comforting low growl of their diesel engines calm my nerves. To Brooklyn Roasting I head. It's the best coffee shop in the neighbor, if not the whole city. Normally I just get a medium drip coffee, black. Today, though, I have a full punch card which means anything on the menu is free. I opt for a hot maple-shay. It's a cappuccino flavored with maple-syrup and the most expensive thing on the menu. Not normally my style, but it's good twice a year. It's my habit on Sunday's to come here. I pick up a bagel, come here for coffee, then sit at a table and read for a few hours. The chairs aren't comfortable, but the music is good and the coffee, fantastic. Afterwards I'll stroll through Brooklyn Bridge park and listen to the brackish waves crash against the rocks of the shore or I'll walk up Jay st into downtown Brooklyn for some pork and cabbage dumplings from Golden Fried Dumpling or maybe south to Montague st for a bánh mì from Hanco's.

Before I moved to New York I knew what wabi-sabi meant, that something with flaws can be more appealing than something without. But it wasn’t until after I lived here for a while that I really started to understand the concept. This neighborhood—my neighborhood—embodies it. Lining every street are slowly crumbling brick buildings interspersed with the glass and steel behemoths beginning to migrate over from Manhattan. The streets aren’t beautiful despite the decaying brick, they are beautiful because of it. While the glass facade of the skyscrapers is appealing in a modernist, ultra-minimalist aesthetic, the bricks buildings are home because they are human. The crumbling mortar and cracks metaphors for our own imperfections and flaws. We all aspire to be the flawless glass monolith, but we are old, earthen bricks weathered with time.

I'm reminiscing about all of this, all these simple little habits I've picked up over the past four years, because next week it's all going to change. I'm moving from my apartment on Columbia Heights to a studio in Staten Island. It'd be a lie to say I don't like Staten Island. What's closer to the truth is that I don't know anything about Staten Island. Before last week I had never once been there. Then, because I was running out of time and options, I drove across the Verrazano, payed the unimaginably high $16 toll, and put a deposit on a basement studio on Bay st. I don’t want to leave Brooklyn Heights; it's the best place I've ever lived; but my apartment is no longer going to be available after next week and there wasn't a chance in the universe I could afford another place here. So off to Staten Island, off to the forgotten borough, I’ll go. Maybe I'll like it there as much as I love it here. Maybe I'll find a new bench to sit on, a new coffee shop to patronize, and a new bagel shop where I can be judgmental of other people's carb-fix. Maybe I'll get sentimental about the Verrazano or the Staten Island ferry instead of the Brooklyn bridge. Maybe, but I doubt it. More realistically, it'll be a place to live while I get some things in order. I'll stay for my one year lease and then move on. Maybe by then I'll be able to come back to Brooklyn, or maybe I'll give Washington Heights or the Lower East Side a go. I don't know. What I do know is that Brooklyn, more specifically Brooklyn Heights and DUMBO will always have a special place in my heart. It was my home during some fantastic years in my life that I'll never forget. So, Brooklyn, it's au revoir for now, but not forever. I love you too much for that.

It was a chilly morning in November when Olivia walked into her favorite coffee shop in Brooklyn and ordered a triple-shot of espresso. While waiting for the barista to make her drink, Olivia 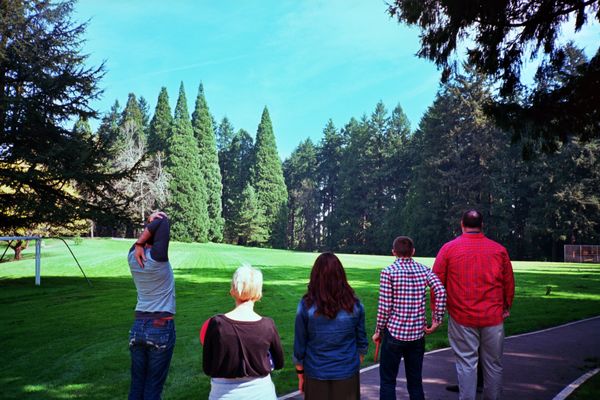 This past March, two of my long-time friends and co-workers married to each other. Here's the video I made documenting my trip to Portland, OR for their wedding. Photo credit goes to Kevin